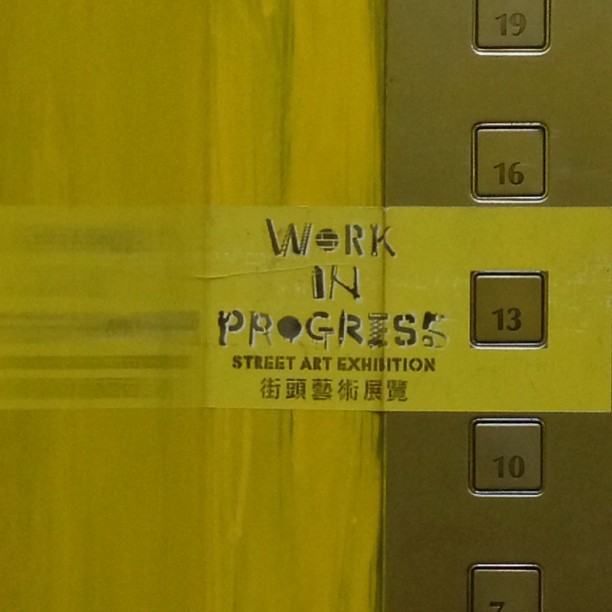 This pic was taken in an industrial freight elevator.

So the story is thus: Somerset House is one of the older buildings in the cluster that makes up Taikoo Place in Quarry Bay. It’s been slated for demolition. However before they tore it down, they decided to have an art exhibition on one of the floors in the building. The 13th floor and the goods loading bay were chosen as the locations and various street artists (including those from overseas) were invited to make art of the place.

The concept was to take street art and “legitimise” them for viewing by placing them indoors in an art gallery environment.

The exhibition booklet (in PDF form) can be found here if you’re interested to see which artists were invited and what works they presented.

Personally, I think this was a great project. Take a building that’s slated for demolition and have street artists work it over. It could only have been better if they had opened it up to more artists and to a larger section of the building.

Take a 15 second look at the video for Circle’s CAPTURE THE FLAG: THE DOMESTICATION OF ALL THINGS here. Or an innovative way of making art – carve out the plaster on the wall!

The exhibition was presented by Above Second Gallery, the Hong Kong Youth Arts Foundation, the Savannah College of Art and Design and Swire Properties (who obviously, own the place).